Cocktails & Fairybread- A Magical Combination At This Sydney Bar 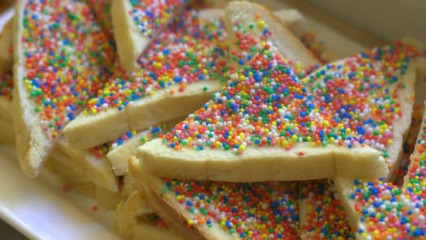 Right now it is ‘Unicorn Month’ at Newtown Bar The Thirsty Wolf, where dessert cocktails with house-spun fairy floss and fairy bread are on the menu.
Never has there been a more magical seasonal menu, where you can pair plates of fairy bread (for just $2.95) with board games like Scrabble, and a cocktail from a menu that includes the likes of:

It seems that there’s a resurgent interest in Fairy Bread in Australia lately, especially after the US caught wind of our delicious national treasure. They just don’t seem to get it! Check out what some American publications have written about Fairy Bread recently:

America’s confused reaction towards fairy bread has ignited our passion for the simple yet delicious treat. Many publications have jumped to it’s defence, which can only mean one thing: If you’re attending a birthday party in the coming weeks, bring your sweet tooth.