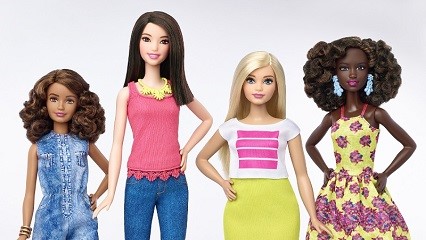 Judging by her waistline, Barbie has had more careers than hot dinners – 180 in 57 years to be exact. She’s been an astronaut, a paratrooper and even a presidential candidate, but while her outfits and accessories have changed her body hasn’t.

Tall, blonde and skinny was a winning formula, but in recent years the tables have started to turn and with a more diverse view on beauty being “so hot right now” the makers of Barbie – Mattel – have noticed a corresponding drop in sales.

Seeing a need in the market, they released a range of Barbies with new skin tones and hair types, and even a flat foot (no high heels required) in 2015, but they still had an ace up their sleeve.

The Biggest Change in Barbie History

In a development so secret that was code named “Dawn” and kept secret from even the families of Mattel executives, Barbie now comes in three new body types. As well as the classic shape there will now be a tall, a petite and a curvy barbie available, as well as seven skin tones, 22 eye colours and 24 hairstyles to choose from. Already available online, the dolls will be released in stores in March.

An article in The Guardian road tested the new dolls with kids, noting that they didn’t really notice the difference. However, the effects go much deeper.

Several studies suggest toys with unrealistic body shapes cause self-conscious feelings about weight in very young girls. A study quoted in Live Science found that girls between 5 and 8 years old who were showed pictures of the classic Barbie had lower self-esteem and a “greater desire for a thinner body shape” than girls who looked at pictures of dolls with more realistic body types or who were shown no dolls.

A Front page article in Time magazine broke the story, and discussed the ongoing controversy about Barbie’s unrealistic body, highlighting that Barbie had a career when most women were expected to remain in the home.

In 1973 when Surgeon Barbie was released, only 9% of doctors were women. Mattel president and COO Richard Dickson said “our brand is about female empowerment… Ironically, our critics are the very people who should embrace us.” I bet with sales dropping steadily since 2012 he’s hoping that they do now.

“We believe we have a responsibility to girls and parents to reflect a broader view of beauty,” added Mazzocco. Only time will tell whether Barbie will empower a new generation.

ellaslist wants to hear from you, what do you think of the new Barbie dolls?