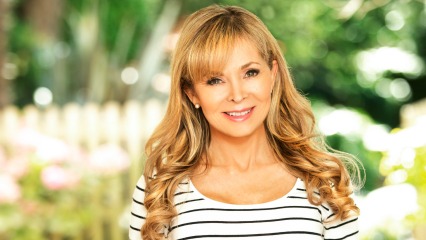 World-renowned children’s cookery author Annabel Karmel has 25 years of expertise in cooking for kids, and it all started because she had a fussy eater of her own. We chatted to Annabel about how to feed our fussy kids and the best way to get more nutrients into their diets.

Fussy eating seems to be at the forefront of most parent’s minds, especially parents of toddlers. Is there such a thing as a fussy eater or is it just a phase they all go through?

It’s quite interesting because in the UK there was this huge study that made front page news and the research suggested that toddlers eating habits are largely due to genetics and not to parenting. They looked at 16 month old twins – one was a good eater, one was a bad eater – and they were brought up in the same environment and given the same foods. What they deduced was that it wasn’t actually the mother’s fault, some kids are just born with a fussy gene.

So what about those toddlers who aren’t so much fussy but are trying to assert their power? I feel like my toddler plays mind games with me!

That’s right, it is asserting their independence, but the thing is not to show too much attention when they don’t eat and to praise them for good eating habits. If you don’t give them attention when they don’t eat then they start to realise it’s not worth making a fuss – its psychological. Also, we should try not to let our kids go hungry, so give them something when they get home from school because that’s when they’re most hungry – a lot of parents think I’ll give them crisps or biscuits but this is the time to give them a healthy snack as they’ll be more likely to eat it.

What’s your opinion on bribing toddlers with dessert?

I think that bribery isn’t a bad thing but I wouldn’t use it with dessert, I would use stickers or you can stay up to watch your favourite TV program or reward charts. You don’t want to create a divide between foods and say, “this food is bad but if you eat it you’ll get something good.”

I think most of our readers would call themselves busy mums – what is your advice for cooking dinners when it seems like there’s never enough time?

Well, actually it doesn’t take very long to cook something from scratch, there are so many shortcuts. I also have a range of food in Australia that are frozen foods for toddlers and babies, so they can do that. The problem is, parents get stuck in a rut and just give their kids four or five things they know they like. And won’t try them on anything else. The more you don’t give them new foods, the fussier they’ll get. It’s a good idea to plan ahead and make more than one meal, for instance I’ll make a batch of chicken burgers or lasagna or several fish pies in individual ramekins and then just whip them out when I need them rather than cooking every night. Remember that children like sophisticated foods, not just things coated in bread crumbs – all those things you think they might not like you just need to try, it’s trial and error. My book is all about the kinds of things kids like, I’ve taken the hard work away from you because I’ve tested it all on kids.

That’s interesting because we recently did a story about how we are sick of the kid’s menus at Sydney restaurants – basically nuggets or fish and chips. What would you like to see on a kid’s menu?

Well I do the kid’s menu at the Intercontinental Hotels and they’re amazing, you’ve got salads, watermelon popsicles, mini steaks, proper bits of chicken. Why does it always have to be nuggets and spaghetti hoops – parents don’t like this either. Do you think kids should be eating what we’re eating?

Well they don’t like spicy foods on the whole or food mixed up with lots of other ingredients, like stews. But you can cook for the whole family like a roast or a stir-fry if you make it look attractive. Serving something in a ramekin can make the world of difference, they eat with their eyes – and if it looks unattractive they’ll tell you they don’t like it before they even try it. Children are quite stubborn!

What’s your opinion on baby led weaning? It seems to be very fashionable at the moment

That’s interesting, my opinion on this is that babies tend to be fed from 4-6 months of age and their hand-eye coordination isn’t that good so I tend to do a mix of purees that you can feed them, and things they can put in their hands. You just have to make sure it’s soft so if they bite something off they can absorb it in their mouth. I don’t really believe in baby led-weaning in exclusion of other foods as they don’t have the coordination to get the nutrients that they need, for example they need things like meat and you can get a lot of nutrients into a puree but they can’t always get that when they’re using their hands. So I’m all for giving finger foods but I think it should be a mix, I just see it as weaning – you shouldn’t be too rigid.

Your first cookbook is 25 years old now, what’s different about the new edition?

I’ve revised it, a lot of the advice is changing – like you shouldn’t hold back on giving them foods like peanuts unless there is a strong family history of allergies because by withholding them you actually make them more likely to have allergies. I have added around 15 new recipes and there’s a new chart you can stick on your wall with a guide to all the new foods you can give your child and you can tick them off or put a smiley face on it if they like it. There’s lots of new things like using a spiraliser and modern recipes that are popular now. Adults love my recipes too, they taste great!

In Australia we spend a lot of time outdoors, can you suggest some healthy snacks kids can eat on the go?

Things like carrot sticks and hummus, they love hummus and you can wrap the carrots up in damp paper to keep them fresh. Or you can make mini muffins, I make carrot and apple muffins (see recipe below) and get the child to help me make them. I also like making energy balls but instead of using sugar I use dates and add oats and chia seeds, they’re delicious. Try and make your snacks healthy, even dried fruits like raisins are actually not a good snack – they are very sugary and sticky – it’s the same with those muesli bars. You think giving them raisins is a healthy but it’s not a good snack – it’s as bad as giving sweets.