Hasbro is Releasing A New Lie Detector Game This Year 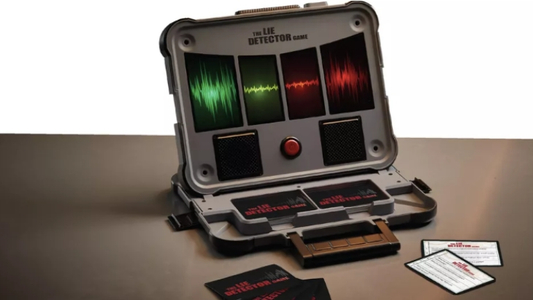 Set to hit shelves in September 2019, board-game extraordinaire Hasbro’s latest game offering claims to know whether or not you’re telling the truth via your voice. The game made its debut at this year's New York Toy Fair, where a lot of the year's most exciting toys were previewed.

The game comes with a kit which works via voice analysis, according to Hasbro. In the box is the lie detector, plus 64 cards with various questions to answer. Or, Hasbro suggests, "you can make up any yes or no question you want!” The opportunities are endless.

The premise is that if you tell the truth, you win a point. If you lie, you lose a point. This is different from The Original Lie Detector Board Game created back in 1960, which was a crime-solving mystery game involving cards but didn't include anything resembling an actual lie-detector. Oh, 21st-century living!