The Secrets Behind Out of the Blue 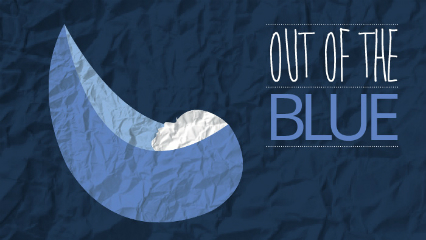 Out of the Blue is an enchanting introduction to sounds, movement and textures for babies 6-18 months (and their grown-ups) at Sydney Opera House from 30 July to 2 August.

We chatted to Sarah Argent, the Director of Out of the Blue, to find out more about this mesmerising production.

How did you come up with the ideas for Out Of The Blue?

The ideas for Out of the Blue came from a combination of the work and life of one of my favourite artists, Paula Rego (a fabulous Portuguese painter), and a video on daytime television of a baby in fits of giggles at her dad scrunching and tearing a piece of paper – so it’s a real mixture of high-brow and low-brow influences.

The colour-scheme for the show – white with touches of blue; the shadows; the scale of objects – both large and small – all came from Paula Rego’s work which features lovely blue and white Portuguese tiles and stark shadows caused by the intense Portuguese sunlight. The ripping, tearing, scrunching, and rustling of paper came from watching YouTube videos of babies laughing at all sorts of antics with paper.

Both happened while I was researching Theatre for Babies thanks to a Creative Wales Award from the Arts Council of Wales. I’d been making work for 3-5 year olds, but was interested in finding out more about the emerging field of theatre for babies from birth to 3. I was lucky enough to be able to spend the equivalent of 5 months over the course of a year reading about babies, spending time with and playing with babies, seeing theatre for babies in mainland Europe and elsewhere in the UK, and experimenting with ideas for my own show for babies – which became Out of the Blue (which is for babies aged 6-18 months).

What’s your favourite thing/s about performing this show?

Our favourite thing about performing this show – Kevin Lewis performs and I operate sound and lights (but exactly when the sound and lights change depends on how much the babies are enjoying what Kevin is doing, so they are kind of an element of the performance too!) – is seeing the babies watching quietly with open mouths and wide eyes – and then hearing them giggle.

We also love hearing the adults saying what a relaxing experience it’s been for them: they sit or lie on cushions and duvets with their babies on their laps or just in front of them and the colour-scheme and the music are gentle and soothing too.

What’s the most surprising thing that’s ever happened in one of these performances?

In one show (in a nursery in England in an area of high-deprivation) there was a little boy who was only 7 months old. He started giggling near to the beginning of the show and carried on giggling throughout – he had a gorgeously infectious belly-laugh that set off lots of laughter among the other babies and the adults. At the end of the show, one of the staff told us that he’d been coming to the nursery since he was 3 months old and they had never heard him laugh before!

Have you ever toured this show in Australia?

This is the first time the show has been to Australia – in fact it’s the first time Kevin and I have been to Australia (we’re very excited about the trip). We’ve had sell-out residences in Cardiff (where we’re based) and at Polka Children’s Theatre in London, as well as Out of the Blue leading to the creation of a Christmas show for babies that played to sell-out audiences for a month at the Unicorn Children’s Theatre in London last Christmas and New Year.

What are you looking forward to most about bringing the show to the Opera House?

We’re always fascinated to travel and to see how audiences across the world respond to our work – so we’re intrigued to see whether Australian babies giggle as much at Kevin playing with paper as other babies have. We’re also thrilled to be performing in such an iconoclastic building as Sydney Opera House – the thought that we’ll be walking to work each morning and seeing that stunning building and the harbour in front of us is still hard to believe. We’re also delighted that Theatr Iolo is the first Welsh company to visit, and to be the first artists to perform for babies here.

I used to live in Denmark and I speak Danish, so I’m especially thrilled to be performing in the Utzon Room in tribute to the great Danish architect Jørn Utzon.

Why do you think kids love Out of the Blue so much?

Obviously, with our audience being aged 6-18 months, they’re not able to tell us what they love about the show, but from observing them – and from the feedback from their parents who regularly tell us with amazement that they’ve never seen their babies sitting so still and focused for so long (the show itself lasts just over 20 minutes and then there’s an opportunity for the babies and the adults to play with paper) – we think it’s about Kevin’s engagement with them: the audience is deliberately small (a maximum of 15 babies) so that he can make direct eye-contact with each baby and copy them and tailor his performance to their individual responses.

What makes Out of the Blue different to other kids’ shows?

Out of the Blue is “a very small play for very small people (and their grown-ups)”: it’s something they sit and watch while Kevin performs – he makes contact with them during the performance but, unlike much of the theatre for babies, it’s not an interactive environment for them to explore (although we do, very occasionally, get a little one who wants to come and join Kevin onstage!). We’ve seen some beautiful productions that are about the babies crawling or shuffling around and investigating and touching what captures their imagination, but we wanted to attempt something different.

We hope that Australian babies will be as fascinated as the UK and Irish ones have been!

For more information about this show visit the website. BOOK HERE!