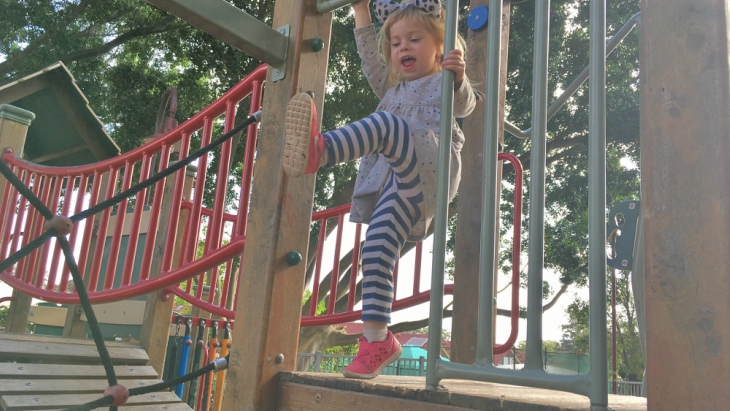 We love that a sense of adventure is coming back to Aussie playgrounds. The recent trend in playgrounds is to make them more challenging to our kids because the research proves that risk helps build independence and allows our kids to make choices that allow them to navigate the world safely. If you think about it, more and more Sydney children are growing up in apartments, so there is a real need for these types of parks so kids can navigate challenges in the outdoors that would otherwise come from backyard play. Indeed, too much safety isn't necessariy a good thing. The truth is, kids need to fall over in order to learn boundaries and boost resiliance.

Some playgrounds are designed with adventure at the forefront (check out our list of favourites here) while other new parks simply do some clever design work, like making the slippery dip only accessible via a rope climbing net (see this fave of ours here). This allows kids to have a sense of freedom with the ability to make choices as they play - which in turn helps them grow and learn. 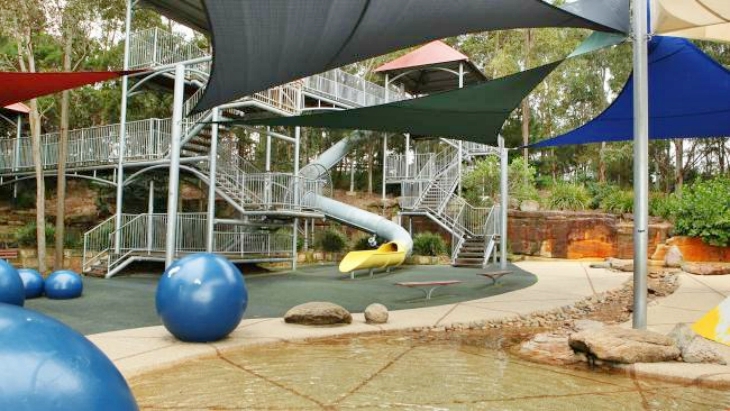 Adventure Does Not Have To Mean Danger

There is a huge difference between putting a sense of adventure into playgrounds and playgrounds that simply put our kids at risk of danger. We recently did a Facebook call-out to find out if you had discovered any dangerous playgrounds in your area and the response was overwhelming. And rather polarising. On the one hand, many of you had experienced a level of danger in your local park that you deemed unacceptable. And on the other hand, we were accused of wrapping up our kids up in cotton wool! And if we had a dollar for everytime we heard someone cry, "in my day playgrounds were actually dangerous" we would be rich enough to retire from ellaslist!

Don't get us wrong, we love an adventure playground as much as the next parent, what we are more concerned about are the immediate dangers found in some of our local playgrounds, such as those without shade, those close to busy roads and those with gaping holes that - while fun for older kids - are the cause of accidents amongst our toddler-aged kids. That's the real danger. Not a rope ladder to get to a slippery dip!

So, what did we discover? Well, these seemed to be the biggest issues.... 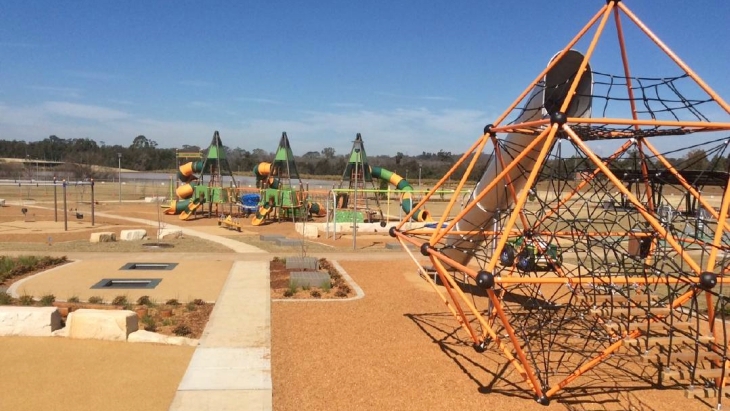 No Shade And Hot Slides

This was a big point of concern and continues to be with a lot of new playgrounds we discover. Many are just too young to have the luxury of big, vast trees to protect us in the hotter months and some will have a shade cloth that only covers a small section of the playground. Big offenders here are Riverside Playground in Spring Farm, Bungaribee Park in Western Sydney Parklands, Marrickville Park Playground, and Renwick Street Playground in Alexandria. The lack of shade concerned most of you, not just for the risk of sunburn and overheating, but the way it burns your kids' bottoms on the metal slides! Ouch.

It seems that the price of shade is the main reason councils are holding back from keeping our kids covered. “Shade cloth-style shade structures over play equipment are expensive to install, and to maintain and have been associated with serious accidents in other local government areas,” a spokesperson for the Blue Mountains told the Daily Telegraph in 2014. 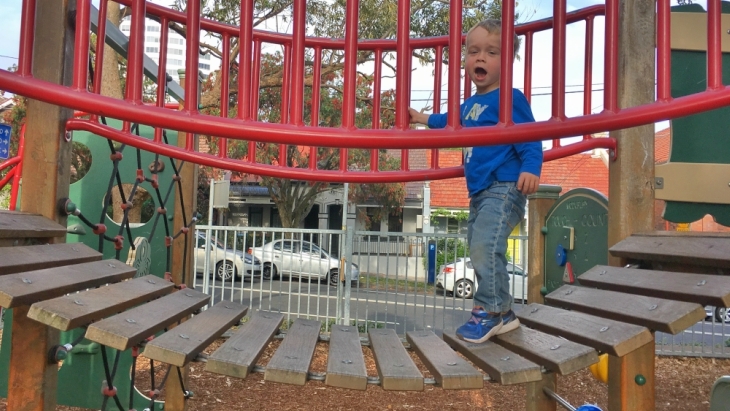 One of our readers pointed out that Clemenston Park, aka the train playground in Bondi Junction has some dangerous gaps that little ones can easily fall through. "There's an elevated wooden bridge where the space between the rail and the walkway is massive - really easy for a toddler or small child to fall through. No issue if your kids are older but stressful if you have little ones," said one reader. And while some expressed the view that it ruins the fun and exploration for older kids, most agreed that big gaps in playground equipment can be nerve-racking for parents of kids who take their younger children along to play with their older siblings. 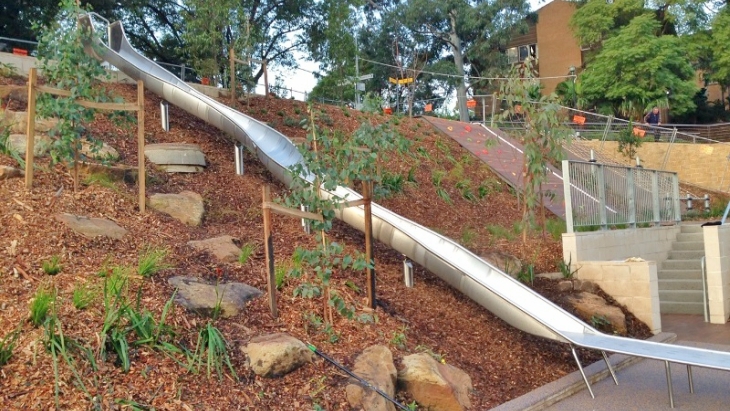 We just love superslides (here's a list of our favourites) but some parents are concerned that these super-fast slippery dips are super dangerous for little kids who pick up lots of speed. Putney Park in Ryde was pointed out for its metal tube slide with "funny left hand bend that you don't see coming because its pitch black in there"  Others told us about times that they witnessed children breaking their arms on the slide.

Also noted was the Parramatta CBD River Foreshore Park with some parents concerned that the super fast slide launches their kids towards the river! Yikes. 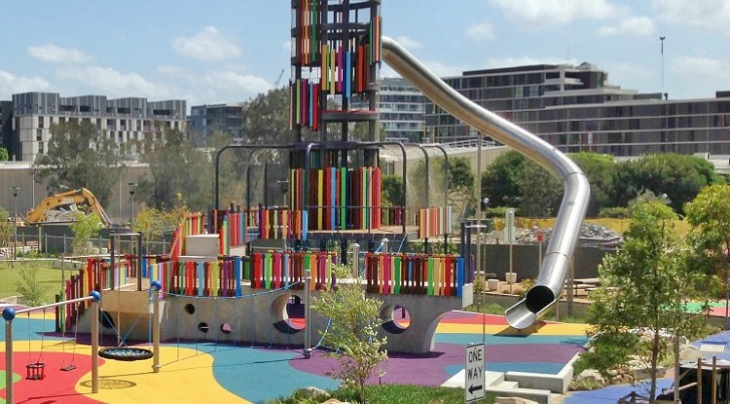 No Fences And Close To Roads

Quite a few playgrounds were mentioned for their proximity to busy roads, which can be a hazard for runaway toddlers, or parents with multiple children to keep an eye on. At Centennial Parklands the Fearnly Grounds Playground, which has no fences and is close to a busy road caused concern for some parents. As did the wonderfully designed Wulaba Park Waterloo which unfortunately did not include fences in its design when it was constructed onto the busy streets of inner-city Sydney.

While a busy playground is not a crime, it does cause a hazard for parents who look down to check their phones from time to time (also not a crime, us parents need time to read ellaslist!). Darling Quarter water play was referred to as the "twilight zone" for losing kids. The problem is, the Darling Harbour playground is just so popular that it's always packed with tourists and locals alike, including kids and adults who want to have a splash. Take your eyes off your kids for a second and they can get lost in the fray. Centennial Parklands was pointed out again for its busyness, plus its proximity to the road. "That park is so busy and between a pond, canal, busy road and wild. It's very hard to watch two young kids at once, especially if they decide to run in opposite directions," said one reader.

This article was compiled by the help of our lovely Facebook fans. ellaslist are now working with local councils on how to best remedy these issues. And if you're thinking that we're too soft and these playgrounds sound like lots of fun for your kids - by all means use this as your adventure playground bucket list!