UPDATE: On 20 July Waverly Mayor, John Wakefield, announced that there would be no ban on surfing at the north end of Bondi Beach.

"The issue is becoming a little bit overblown," he told reporters.

"No policy has been devised. No proposal has been received. There's a survey asking questions about what people perceive to be problems and potential solutions."

It was part of the survey because the Council moved a motion asking for a review of the definition of surfboards. This came about because of some concerns about soft boards actually having fibreglass fins.

There were "large numbers of people" in Bondi, particularly swimmers, concerned about boards making their way into between the flags, Mr Wakefield said.

"We're conducting a survey to find out the depth of the concern. (But) we believe we have the mix right now."

Bondi Beach is the most famous surf break in Australia, but a new proposal to ban surfers from half of the beach has locals foaming at the mouth. Under the plan, surfing on any craft with a fin would be restricted to the breaks at the southern end of the beach.

The proposal is a result of the recent survey of beach users as part of a yearly review of operations at Bondi, Bronte and Tamarama beaches.

The protected and consistently calm north Bondi is the perfect area to learn to surf. Right now the zone is only accessible to those on foam or 'soft' boards, while the more seasoned surfers tend to tackle the waves at the south end of the beach.

"The (council) has asked for a review of the definition of soft and hard boards and from fibreglass and foam topped to simply fin or no fin," the survey said.

"This would restrict any craft with a fin to the breaks at the southern end of the beach.

"This would eliminate any interaction with people who choose to bathe between the flags and any surf-craft with fins from the northern half of Bondi beach."

I regularly surf at North Bondi and hope to one day teach my kids to surf here. The area is a melting pot of kids on soft boards, novices, nippers, backpackers, surf school attendees and swimmers - but you know what? Like a congested Delhi high road at peak hour, it just works. Yes, it's mayhem but it's harmonious. The vibe is fun, friendly, non-threatening and full of people 'having a go'. 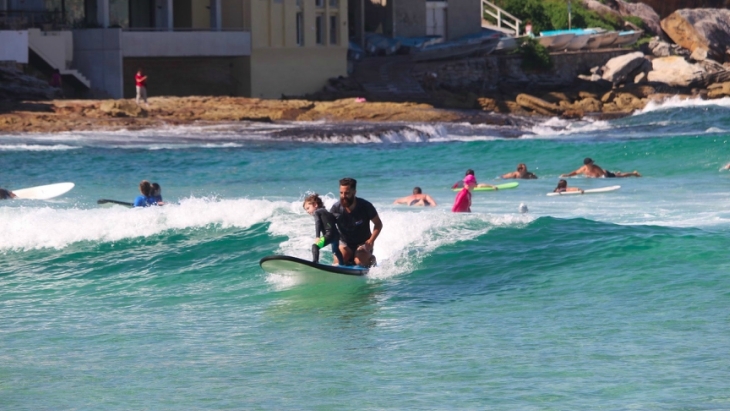 Even on a busy summer's day when riding a wave with a bunch of other people, so close you can smell what they had for breakfast, I've never felt in danger. There's no ego here. On a particularly crowded wave there are never punches thrown, instead what is thrown around is the North Bondi-born term, "party wave". The more the merrier is the mantra here.

What would be dangerous is forcing everyone, from pro surfers on fibreglass boards to British backpackers on 9ft logs, down to the south end. Now that would be mayhem. Waverly Council say they are doing this for safety reasons, yet this would be the most dangerous and chaotic place to enter the water.

"If the lifeguards started doing their job and got out of the Tower and off the TV, there'd be no problem," said veteran surfer and ex-lifesaver at Cronulla Beach, Euan Thomas.

"The solution is to go back to how they used to do it. Over the past 10 years, what's happened at Bondi, is the surfcraft areas are getting closer and closer to the red and yellow flags [designated to swimmers]," continued Euan.

"Back in the day, they used to be 40 to 50 metres away, now it's about 10 metres away from the flags. There's no buffer zone. And as a result, surfers are riding waves into the flagged zone and the lifeguards aren't doing anything about it. It's a recipe for disaster."

We all want Bondi to be safe, but restricting surfing goes against every fibre of a surfer's body. Let's hope the council see reason. You can contact Waverly Council here to voice your concerns.