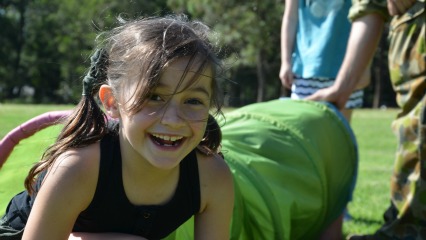 Does anyone remember Charlie Sheen in Platoon?! Well as soon as our party host Daniel (aka ‘Sergeant Slaughter’) burst onto the scene at my son Jude’s 7th birthday party in Centennial Park last weekend, the tone was set – G-rated, of course! From the moment the Sergeant arrived, fully decked out in combat fatigues, army boots, aviator sunnies and war-paint, every single party guest (boys and girls aged from 5yrs all the way up to 10), hung gleefully on his every word for the next 1.5hrs.

Every Kid’s Idea Of A Good Time

I can’t think of a more obvious yet hilarious method of keeping a rowdy bunch of children at an outdoor party under your spell than drawing them into a pseudo military world of competition, racing, sporting drills, obstacles, and more….just for the fun of it.

The Sergeant Slaughter character quickly endeared himself to the group with his humour, energy and enthusiasm, and an unwavering commitment to his character - within the first half a minute he had the entire bunch racing off to a distant tree and back! And again! A series of race- and hide-and-seek-type activities ensued, with the kids finally ‘earning’ their first war-paint stripes. Even the kids who’d refused our face-paint on arrival were lining up to be ‘striped’ by the Sergeant.

There was an obstacle course quickly set up – but even this was made into something more than just the course itself. As every child was tagged to start, they were issued with an animal character to imitate – jump like a kangaroo, like a frog, waddle like a penguin – and the line of kids moved quickly through the course with everyone in hysterics.

They played tug-o-war (a dead heat) and more, until the moment they’d all been waiting for….

What a great idea! The kids had now ‘earned’ their second set of war-paint stripes, ready for the main attraction. They were kitted out in red and blue team colours, safety goggles, matching Nerf guns, and ammo (foam bullets), ready for combat.

Starting with some freestyle all-in play, Sergeant Slaughter worked the kids through another series of fun, energetic team games, including a competition to perform the most heroic death throe and culminating in a “kids vs parents” battle for a ‘stolen’ birthday cake…..I should mention we had to interrupt play for my weapons training, having never (yes never!) fired a Nerf gun before.

On numerous occasions throughout Sergeant Slaughter made a point of singling out our birthday boy for special attention – chosen as team captain here, a private pow-wow discussing nerf tactics there – all of which I could see made him feel extra special (having an overbearing 10yo sister, it was heartwarming to see him the centre of attention for a change).

As I was taking lots of photos, the Sergeant stopped on occasions to check I was getting the shots I needed/wanted. He took care to help the youngest kids and made sure the girls weren’t being ganged up on, he rigged up his camouflage ‘netting’ so that we could get the kids to pose at the end for a group photo (which hadn’t even occurred to me – thanks Sergeant), and even mustered all the kids again for the lighting of the candles on Jude’s ‘cammo’ birthday cake.

Overall he was engaging, attentive, energetic, and just terrific fun from start to finish. The kids all had a ball. We (the parents) loved it as we felt like we were part of the action – guests at our own party! – without being relied on to run the activities ourselves or commandeer the kids.

A Word About Superheroes Inc.

Our Commando Party was delivered by Army & Spy Parties, a brand new offering for older children (5yrs+) by one of Sydney’s entertainment institutions, Superheroes Inc. Superheroes Inc. have been delivering quality party entertainment to Sydney families since 2002, and it shows. From the time of booking, through all the clearly communicated planning tips, guidelines, general party advice and details on our entertainer (how/when he’d arrive etc), to the post-party correspondence, the whole experience was clear, helpful, and personal.

I hope that Sergeant Slaughter went home and cracked himself a cold one after the party because he sure earned his stripes at Jude’s birthday party. We would book him again in a heartbeat.