Scary Stuff! Outbreak of Rare Parechovirus Could Have Fatal Complications For Newborns 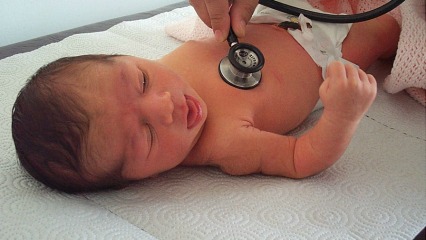 As if looking after a newborn didn’t induce enough anxiety, a recent outbreak is giving new mums even more to worry about. An outbreak of parechovirus has been reported, with 55 cases in Queensland already this year. Doctors are warning that complications could prove fatal in babies under three months old. Thankfully no deaths have been recorded to date, but two babies were left fighting for their lives in Toowoomba recently. So far cases have been reported in Brisbane, Gold Coast, Toowoomba, Bundaberg, Mackay and Townsville.

How To Spot The Virus

While adults or older children may have mild or no symptoms, babies under three months old are at the highest risk of suffering severe symptoms and complications of the illness include hepatitis and encephalitis, which could prove fatal. Keep an eye out for symptoms which include irritability or lethargy, a rash, diarrhoea, fast breathing and fever, with experts calling the disease highly contagious.

The disease was first reported in Australia in 2013, but was not recognised formally until 2014 when a test became available. The fact that the virus is not well known can lead to misdiagnosis.

Dr Theo Sloots, an infectious disease expert told The Courier Mail “When children get sick they go to the GP who doesn’t recognise it as parechovirus. They just think it’s an infection. Awareness needs to be raised among GPs.”

Janelle Schembri’s daughter caught the virus at twelve days old. She says “We had obviously never heard of it. The nurses had never heard of it and half of the doctors hadn’t even heard it,” and urges other parents “If your baby is young and they have a temperature, go to the doctor or the hospital. Act on it.”

How To Protect Your Family

Doctors are currently trying to create a vaccine for parechovirus, however there is none currently available. The virus is spread through saliva, including coughing and sneezing, as well as faeces. The best protection is increased hygiene precautions like thorough hand-washing with soap after going to the toilet, blowing noses and changing nappies as well as before eating.