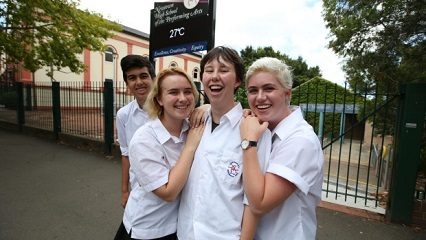 Newtown High School of the Performing Arts in Sydney’s inner west has agreed to change their uniform rules, now allowing students to choose from the entire range of uniform options offered, rather than enforcing a “boys” and a “girls” uniform.

Parents and students support the move

Students and parents have welcomed the move with Tony Ryan, one of the parents, telling the ABC “Changes to the uniform policy mean that kids who feel that they don’t fit into a particular category feel safe”.

The school has told students that they can refer to themselves as either male or female and use the bathrooms of whichever gender they identify as.

Not surprisingly the move has drawn criticism from the Australian Christian lobby, and spokeswoman Wendy Francis told the Sydney Morning Herald “To encourage a guy to wear a dress would just be setting him up for bullying”.

But students at the school don’t agree, saying the school is progressive. An ex-student, Meg, commented on Facebook “Newtown is a place where nobody gets bullied for there (sic) choice of dress or for being whatever sexual status”.

LGBTI advocacy group Safe Schools which promotes gender diversity in schools is using it as an opportunity to encourage other schools to follow suit, stating on its website that “provisions could be considered by the school for the student to wear elements of the uniform they feel most comfortable with,".

The school itself declined to comment, but a spokesman from the NSW department of education told the Sydney Morning Herald that individual schools are free to make decisions about their own uniforms and has said “Students can wear any part of the available uniform options.”