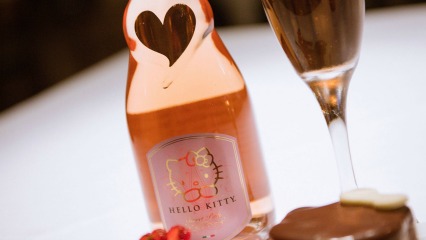 Sanrio, the maker of Hello Kitty, has teamed up with Italy’s Torti Winery to bring us this exciting new product. The wine makers were approached by Sanrio back in 2007 after some of the team drank their wine at a restaurant, and since then, the Torti Winery has been preserving some of their harvest specifically for the new line, according to Delicious.

According to the LA Times, the Torti family is using a blend of Pinot Noir and Chardonnay to make a sparkling Hello Kitty rosé, and pinot noir grapes to make a white wine. To make it even sweeter, every grape is reportedly picked by hand. Patrizia Torti of the Torti family winery told the LA Times: My father and my sister take care of the production, from the soil to picking the grapes. We produce a special bottle with a heart, only for Hello Kitty.” The good news? This isn’t just a limited edition, impossible-to-get-your-hands-on drop; it will likely be sold in multiple countries over an extended period of time. According to Delicious, bottles will have names such as Charmy, Cupido and Lady- this doesn’t sound like a bottle of wine to us, it sounds like an experience. Where Can You Get Your Paws On It?

You can get Hello Kitty wine by the glass, bottle, and bottle-to-go at Antonello’s in the Orange County, United States since it clawed it’s way onto the menu back in October 2016. This Italian restaurant even welcomed the arrival of the Hello Kitty wine with Hello-Kitty themed menu items including watermelon shaped like Hello Kitty, pink bowtie pasta with a creamy 4 cheese sauce, and a chocolate cake in the shape of Hello Kitty. It’s been available in Europe and Asia for some years now, but has limited availability around the rest of the United States, and so far, we haven’t been able to find an online retailer that ships to Australia. Heck, we’d just buy it for the adorable packaging alone. Don’t worry, we will keep our eyes open!