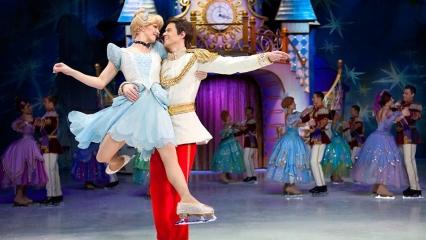 Over our last scorching summer, I introduced my son to the magic of Disney through the live action movie version of Cinderella. Not only did Ayman love the film, we went back once more for a second screening. At home, he spoke endlessly about Cinderella’s beautiful blue dress, lamented the fact that he didn’t have one himself and then took to calling himself Prince Charming and me Cinderella, something he still continues to do!

Ice-Dancing with the Disney Princesses

So you can imagine my delight when I saw that Disney On Ice was presenting ‘Dare To Dream’ at Sydney’s fantastic Allphones Arena. ‘Dare To Dream’ is a celebration of 75 years of Disney princesses, from my son’s beloved Cinderella and the classic heroine of Snow White to more recent additions to the Disney family such as Rapunzel from Tangled and Princess Tiana from The Princess and the Frog.

We alighted from the train at the Olympic Park station (easy walking distance to Allphones Arena) with a steady stream of little princesses dressed as Anna, Elsa, Belle, Snow White and Cinderella. As we drew nearer and nearer to the Arena, this stream became a sea, dappled with the odd Prince Charming.

My son’s excitement grew as he spotted an adult Cinderella in the crowd and the enormous poster advertising the show. The anticipation continued inside the venue with a large number of stalls selling Disney Princess merchandise and themed snack food. While the sno-cones in a range of collectable mugs and popcorn in cute little bags were extremely tempting, Ayman couldn’t possibly go home without his very own Cinderella!

The show started as soon as we got to our seats and my son was awestruck by the lights, music and the appearance of Micky and Minnie on the ice. The arena is set up so that each and every person, regardless of where they are seated, has a terrific view and our seats were no exception. The tiered seating means that even the littlest members of the audience can enjoy the show from their own seat, though this is not to say they won’t still want to watch from the comfort of your lap particularly when characters like the evil queen from Snow White make their appearance!

‘Dare to Dream’ tells all four stories of Cinderella, Snow White, Tangled (Rapunzel) and The Princess and the Frog in cleverly abridged versions. As the first story of Snow White unfolded on the ice, I heard my son on several occasions gasp with surprise or laugh along with the more humourous moments. Apart from these noises however, I didn’t hear a peep from him for the entire show- quite impressive given my son’s incredibly questioning age and nature.

Having been ice skating for the first time just the week before, Ayman was clearly thoroughly impressed by the skill and ease with which the performers travelled across the ice.

All of the most popular songs from these films are included in the show and the audience was encouraged to sing and clap along. There were also a few very special moments where some audience members were included in the performance. There is a short intermission in the middle of the show which was a perfect opportunity for my son to stretch his legs, have something to eat and drink and use the bathroom. By the time the break was over, he was more than ready to get back to the show.

It would be a struggle to find a child between the ages of three to twelve who did not absolutely love something about this show, be it the scale of the performance, the captivating sets and costumes, the incredible skating or just simply the charming re-telling of these classic stories.

While the few ‘scary’ moments from the stories (such as the huntsman’s thwarted attempt on Snow White’s life) aren’t omitted from the show, they are unlikely to cause any upset and I didn’t notice any fear in either my son or any other audience members. There are so many joy filled and happy moments throughout anyway that any unease would be quickly forgotten.

My son’s favourite part of ‘Dare to Dream’ is probably not difficult to guess! When asked, he didn’t hesitate to tell me that it was Cinderella but not because of his love for the story or her beautiful costume but because ’she’s such a good skater!’

A modern childhood just doesn’t feel complete without Disney. Some of my earliest memories relate in some way back to Disney’s creations; lip syncing the song of the blue fairy from Pinocchio at a ballet concert, spending hour upon hour recreating Ariel’s underwater kingdom with paper dolls after a screening of The Little Mermaid, crying at Bambi’s mother’s death and watching The Jungle Book from the back seat of our family Datsun at the now long demolished drive in. And here I was today creating new, special Disney memories with my own son at this wonderful performance of Disney on Ice’s ‘Dare to Dream’. It just couldn’t get more magical.