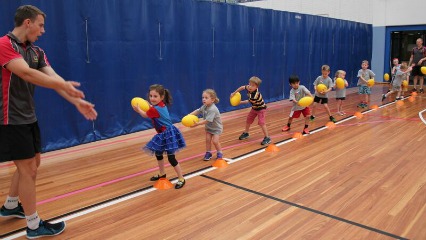 Would he be learning the skills of soccer, tennis, basketball, hockey, golf, AFL, rugby, athletics, cricket or T-ball?

My five year old son spent the car trip to a trial class at Ready Steady Go Kids contemplating the various sports on offer with the program and excitedly speculating on which he would be participating in on this particular day. He decided that hockey would be best. His reasoning – he likes soccer because you can score goals and so therefore he would probably like hockey for the same reason.

Which Game will it be?

As we entered the venue at Menai, one of the 200 locations across Australia where you can participate, hockey was forgotten in the instant that he saw tens of bright yellow rugby balls and he happily turned to me – it’s footy! The two coaches welcomed my son enthusiastically and he was soon wearing a name tag and sitting in a circle singing the welcome song. Everyone’s name gets a mention during this song and I could see that despite not knowing anyone, my son felt comfortable and part of the group right from the start. From here they moved into some warm ups.

The coaches were incredibly fun and motivating for the kids and this didn’t stop for the entire 45 minute session. They encouraged every child and kept the lesson moving at an engaging pace.

The next part of the lesson was where the kids developed the motor skills associated with the sport for that particular week. In this case they practised rugby kicking, throwing and scoring tries. Every child had a ball and plenty of opportunities to practise each skill. The activities were all made fun in various ways. My son particularly enjoyed scoring tries with different body parts such as his nose. There are no more than 12 children in a Ready Steady Go Kids class with a 1:6 instructor to student ratio. This amazing ratio meant that the kids were able to practise throwing and catching with an instructor without waiting long before it was their turn again. It also meant that the kids got regular positive feedback.

My toddler son was also tagging along on this particular day and while the rugby skills went on at one end of the room, my son was destroying an amazing circuit that had been prepared for the class at the other end. The good news was that the coaches did not despair that their fabulous circuit had some missing equipment, but reassured me that this was common and they have no problem with little ones coming along to the lessons. This is great news for parents who want to build skills and confidence in their older kids but don’t have a place to leave the little ones regularly. So the circuit that I referred to above was excellent. It developed the balance and coordination skills of the kids, and also built on the skill of the week with more try scoring.

The accompanying music meant that this part of the lesson also had a fun vibe. Again kids were able to move around at their own level and pace. I really liked the non-competitive nature of the lesson as well as the focus on listening skills. There was also lots of counting and other great preschool skills incorporated. The lesson concluded with a ’What’s the time?’ game. This traditional game was modified to incorporate kangaroo hops, soldier marches and lots more.

The kids then said goodbye with high fives, and all of them left grinning from ear to ear. I would love to take my son regularly to the Ready Steady Go Kids program. The ten different sports are covered over two terms, with the sports rotating every two weeks. Each session is $18.90 and it’s possible to start mid-term. We attended the session for 4-6 year olds but they do have sessions for kids from 2.5 to 6 years. All of the venues are indoors which means that the lessons are not weather affected and always go ahead.

We had a fabulous morning and driving home I concluded that it didn’t matter which actual sport we attended because the focus was on fun and that’s what he had!

I’m excited be one of the new ellaslist explorers and am looking forward to exploring Sydney further along with my mini-explorer boys Hal, aged 1, and Madden, aged 5, and the other big explorer, my husband Brad.

I’m a primary school teacher and when I’m not working we all enjoy getting out and about. With two active boys we can often be found at Sydney parks with our current favourites being Lakes Edge Park at the Ponds and the Blaxland Riverside Park at Newington. We live in the Hills district and spend a lot of our free time at the parks (and the James Ruse Reserve Water Playground), cafes and along the river in Parramatta. We enjoy going to shows together with Madden’s favourite being The Gruffalo at Glen Street Theatre. We love to travel and have enjoyed recent family trips to Warren, Wagga Wagga, Bermagui, Burleigh Heads and Kangaroo Island. We have nicknamed Madden the jock thanks to his love of all sporting events so as well as watching his Saturday soccer matches we are often cheering on teams at a variety of sporting events. I just asked Madden what we do as a family and his response was ‘relax’, which is what we like to do after exploring all of the above.