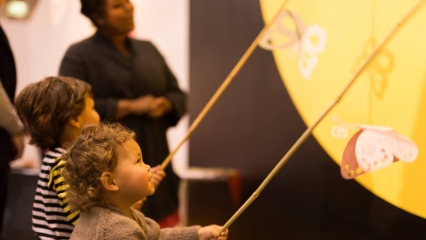 ellaslist sent an explorer to check out the 2015 Way Out West festival, so read about her family’s fantastic time below! The 2016 festival is fast approaching and jam-packed with heaps of exciting activities and performances so don’t miss out!

I didn’t grow up in Western Sydney but it’s been my home since I got married 12 years ago. It always disappoints me when people express reservations about visiting the West because what is shown on the nightly news is such a poor representation of a very complex and increasingly sophisticated area. It’s a vibrant, multicultural place which never fails to delight and surprise.

The Creative Jewel of the West

Casula Powerhouse is one such surprise, a hidden gem of the South-West, tucked away in a peaceful and leafy green pocket of Sydney on the banks of the Georges River where the only sound is the call of the bell birds and the occasional train passing by the adjoining station.

While the 1950’s powerhouse was fully operational in decades past, since 2006 it has been home to an incredible multi-arts facility with various exhibition spaces, a theatre and a number of artists studios.

The space is extraordinary in itself with its expansive concrete walls, lofty ceilings and many original industrial features.

Way Out West Festival for Children

My eldest son and I have visited the Powerhouse on a number of occasions for a variety of interesting events. But the purpose of our most recent excursion was to take the newest addition to our family, my 3 month old son Younes, to the Way Out West children’s arts festival, running from the 8th to the 11th of July.

The Powerhouse started the festival in 2011 as a means of introducing children (from newborn to 12 years) in Sydney to the contemporary arts and it remains the only one of its kind. Each year the festival organisers choose a new theme and this years is all about “Making Your Mark”. All of the activities and events are designed to get the children who attend, to reflect on the mark they make on their family, friends, communities and the environment.

While we went with the intention of enjoying a range of different events and activities there was one in particular that I had been greatly anticipating. ‘Rain’ is a collaboration between the Drop Bear Theatre, The Seam and cellist Edwina Cordingley. It was beautifully described on the Powerhouse website as ‘a place that welcomes babies to the world’, ‘a performance that honours and celebrates new lives’ and ‘a time to wonder and wander together in the rhythm of the rain’.

This description won me over before we even arrived since it conjured up the most exquisite images and stirred so many emotions. The performance and installation art were specifically designed for pre-walkers and only 8 children (and their carers) took part in each session.

It isn’t often that something exceeds my expectations but this event truly did. We started with a brief talk about what to expect and then were ushered into a transition space where thousands of strands of wool hung from the ceiling. As we walked through the space, the strands brushed softly against our faces and those of our our babies.

Once inside the dimly lit performance space we were seated on sheepskin rugs and the cellist began to play softly. All of the baby’s senses were stimulated; they were sprayed with a mist of calming essential oils and water, soothed by the voices of the performers and the cello, lulled into a dreamland by the soft blue lighting and embraced by the warmth of the sheepskin.

There are No Words!

My son alternated between a very deep sleep and being mesmerised by the movement and sound of the cello. Slightly more mobile older children were invited to move around and interact with the stunningly beautiful installation. As the performance drew to a close we were each given a scroll containing a very moving piece of poetry and invited to relax and take photographs if we wished. Overall, Rain was a completely magical experience and one that I will never forget. Words cannot do it justice.

So Many Creative Activities for All Ages

In addition to Rain, my elder son Ayman enjoyed a number of other activities as part of the festival, including the ‘Colourpult’ (an amazing chalk catapult where kids can fling colour onto the walls of the Powerhouse), the Children’s Republic (where the children could design and create their own flag) and the Colour Connect Create space where he made a colourful paper palm tree and spent an age connecting circles of all different sizes in an enormous puzzle.

The Way Out West festival was a terrific place. What better way to start to introduce the arts to your children than through a wonderful festival like this?

Best of all, the Way Out West festival, like Western Sydney itself is open, inclusive and free from pretension. If you’ve never ventured out this way before, please give it a try. You can thank me later!

The Way Out West festival is held at Casula Powerhouse on an annual basis and in 2016 runs from the 13th to the 16th of July. This year’s these is ‘Are we there yet?’- all about life’s journeys. This year kids can make giant kites to be released on the last day of the festival, watch the Saltbush Indigenous performance, watch the acrobatic Jamestown Collective perform, as well as trying their hand at slam poetry, virtual reality experiences and so much more. All events are free. Further information is available at www.wayoutwestfestival.com.au.

Stephanie Boyle is currently a stay at home mother with two gorgeous children. Prior to becoming a mum she trained as a lawyer and worked in various Government positions. She is currently completing a Masters of Teaching. Stephanie and her Algerian husband Kamel have two sons, Ayman (3 years old) and Younes (3 months) and they are doing their best to raise their sons as tri-lingual global citizens. When Ayman arrived three years ago, it became immediately apparent to Stephanie that neither of them were homebodies and so they set off on what would become three glorious years (and counting!) of adventure and excitement throughout Sydney and its surrounds. Stephanie believes that childhood should be pure magic and she is on a continual mission to make this the case for her sons. She loves discovering new places and activities, throwing amazing parties and running a bookclub for her boys and their little friends. In addition to her reports for ellaslist, you can also follow Stephanie and her boys on Instagram @moukinina.