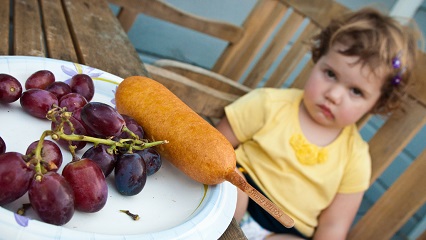 In an interview with The Herald Sun, father of two and celebrity chef Curtis Stone has said parents pander too much to fussy eaters and encouraged parents to let kids go hungry if they refuse to eat the meal you’ve cooked. The topic has sparked hot debate amongst parents.

Curtis told the Herald Sun “I don’t see the big deal in letting kids go hungry a few times. They’ll eat when they’re hungry,” and that he thinks the problem is " too many parents worry about their kids being hungry that they let their children dictate what they eat." He also said children shouldn’t be allowed to snack between meals so that they will be hungry when mealtimes come around.

His comments attracted media attention and hot debate, with Curtis saying on twitter “I think I’ve started something!!”

The majority of supporters argue that they were forced to eat what they were given or go hungry as kids and it worked for them, with comments like “Worked with us as kids” and “I was always told eat what you’re given or go hungry” common on the Herald Sun Facebook post about the article. Many others say they’ve taken this stance with their kids and it has worked for them.

But Others are Angry at the Comments

However many parents are angry at the remarks, pointing out that Curtis Stone is a celebrity chef and not a parenting expert, with comments like “And a chef is just that a glorified cook not an expert at anything else.” Others pointed out that trying to feed a fussy eater is a daily battle for many that don’t appreciate being blamed for their kids’ diet choices.

The Experts Weigh In….

Many noted that some fussy eaters actually had sensory disorders, a theory backed up Nancy Zucker of the Duke University Center for eating disorders. She told Time magazine “That means not trying to force children to eat foods they don’t like at meals, since they’ll start associating the table with unpleasant experiences.”

One ellaslist mum told us: “I was so upset reading (about this). My daughter would go to bed hungry most nights. She is so thin as it is and I can see the frustration and hurt on her face every night when she tries to eat and doesn’t like the food. Curtis should go live in someone’s house with a kid who has sensory issues and see what it’s like!!”

Sydney-based Paediatric Feeding Therapist, Mandy-Lee Adno, is furious. She tells ellaslist: “How a celebrity chef like Curtis Stone could publicly give the advice like he did, I have no idea!! Parents have enough guilt when it comes to feeding their children. It’s hard enough being a parent of a non-fussy eater, try feeding a fussy eater. Contrary to what is said (in the Curtis Stone interview) fussy eaters will starve themselves! I work with parents and children on a daily basis who are constantly going through the battle of fussy eating and from experience, advice like this can be harmful and dangerous.”

What evidence is there around fussy eaters

Curtis’s comments that healthy foods should be offered at each meal seem to be universally accepted, but what to do when they just won’t eat is a decision that every parent needs to make for themselves.

ellaslist wants to hear from you, would you let your kids go hungry if they refused to eat a meal?

Absolutely agree with Curtis! My daughter was hopeless at eating anything healthy so I cut back her eating to 2 small meals during the day, no snacks at all, then lots of veges at night. She was so hungry she would eat everything and now she LOVES veges. My two youngest have been the same. They are way more likely to eat their veges if they haven't had any snacks during the day.