Conjoined Twins Get First Look Of Each Other 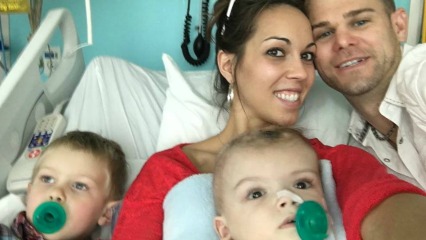 We’ve been following the beautiful story of miracle de-conjoined twins Jadon & Anias McDonald. After a marathon successful surgery, and their first ever cuddle from mum, the twins have now caught their first glimpse of each other.
It’s been a HUGE month for the twins, battling all matter of hardships from seizures and infection, to the speediest recovery in history (according to CNN and Dr. Goodrich) & their first moments without head bandages on. Check it out:

Despite being conjoined by the skull since birth and journeying through identical struggles, the boys Jadon and Anias have never actually copped an eyefull of each other. Recently, this heart warming moment finally took place. Mother Nicole wrote on Facebook: “Finally reunited…there are no words. Just lots of love.” The McDonalds were able to celebrate Thanksgiving recently with hugs and family time in the Children’s Hospital at Montifiore Medical Center in the Bronx. We can’t even imagine the freedom little Jadon felt when his bandages were finally removed earlier this week. According to CNN, Jadon “smiled and waved” at his father Chris when the wrappings came off and revealed a beautifully shaped head with a curl of hair growing. CNN was there to capture the moment, when Chris said to his son: “Hey there, my man..You sure are handsome. Look at you. You look like a perfect little boy…You’ve been having a tougher go of it, but you’re going to get through it.”

We will be sure to keep you updated on this beautiful story.