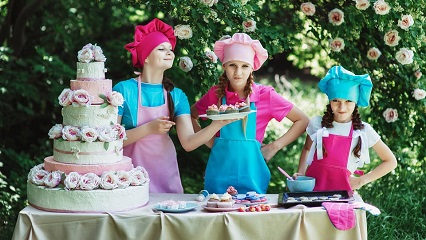 There is no doubt that most kids could cut back a little on their sugar intake, but with some parents and even some schools banning birthday cake is the anti-sugar movement turning us into the fun police?

Whether or not you let your kids have sugar is a highly individual (and often difficult and complex) issue, but when it comes to celebrations, it is a minefield. We’ve all seen or heard about a child at a birthday party that has to make do with a Cruskit or carrot stick while gleeful friends dive headfirst into their cupcakes. Is it the responsibility of the host to shun the sugar, or should parents just let kids have a sweet treat once in a while? Could the social stigma or isolation be more damaging than the sugar?

A healthy attitude is more important than a healthy diet

There are some who believe that having a healthy attitude towards food is even more important than having a healthy diet. One mum thought she had it all when she’d raised her kids to only want healthy food, but when she saw them arguing over whether or not plain popcorn was poisoning them she changed her mind. She concluded that while eating well is important, raising kids with a healthy attitude towards food is the most important thing. They now enjoy the occasional chocolate bar, guilt free.

A cake a day

On the flipside, many parents argue that with the number of kids in childcare centres, there is a birthday celebration almost every week. While parents can control what kids are eating at home, or at least what they are not eating, it isn’t so easy once they’re in someone else’s care. In 2015, Only About Children daycare in Surry Hills received media attention when they banned birthday cakes after frequent complaints from parents with a representative telling the SMH that “The frequency of birthdays each week and thus birthday cakes exceeded the nutritional guide for early childhood,” however other parents described the ban as “completely unreasonable”.

All care, no responsibility

In an amusing letter to Mamamia, one parent asked “whose rules do you follow”, saying she took a friend’s sugar-free child to a party and let her binge on cake and lollies like it was going out of fashion. Admitting she tried at first to monitor the food intake, she soon gave up and let her eat what she liked, returning her home without a word of it. Would that child be less likely to binge had she been allowed sugar at home?

One mum told ellaslist she went to a huge effort to bake a gluten-free dairy-free birthday cake for her three-year-old to take to school for her birthday, only to remember halfway through the day she’d used almond meal and it couldn’t be served in the nut-free centre. A school in Lancashire in the UK has just banned birthday cakes because they can’t guarantee that it won’t have allergens in it, and don’t have time to check with each child. The head teacher blames “modern society” for holding schools accountable for ensuring kids don’t eat foods they are allergic to.

To cake or not to cake? That is the question

No one is arguing that lots of sugar is good for you, and there is evidence that most kids (and adults) eat more sugar than they should. In fact, the World Health Organisation has recently lowered their recommendations on sugar intake to just 5-10% of total energy intake. Where people seem to disagree is whether it is just the empty calories that make sugar unhealthy, or whether it is more toxic than food with similar empty calories. In other words, do we need to limit our sugar intake, or cut it out altogether?

In a story for the ABC entitled “Do You Need to Give up Sugar?” nutritionist Dr Rosemary Stanton says: "Once you go to the extreme of ‘I can’t have any sugar’ then you’ve lost the feasts, you’ve lost the ritual, you’ve lost the pleasure. On the basis of no strong evidence.”

ellaslist wants to hear from you, should we ban the birthday bulge and opt for sugar-free celebrations?

I would like birthday cakes banned at daycares. I agree that they happen too often so as a parent, you can't monitor how much cake is being eaten. Between all the family birthdays and friend's birthdays my toddler eats enough cake with all those parties/celebrations we attend. I don't think he needs more at daycare.

Oh it's definitely going too far. Obviously children, like adults, need a healthy balanced diet. However treats, just like birthday cake, are perfectly fine. Our bodies need fats and sugars, in moderation of course. To be honest, most children dont actually eat very much of the cake, its the excitement of knowing there is a cake and the idea of being able to celebrate the incredibly important event being someones birthday. I feel incredibly sorry for these children growing up now with every element of fun being eliminated. So many parents claiming the sugar hypes them up etc, In most cases, it's simply a case of the kids being excited from being at the party or whatever event. I really do believe, in so many cases, parents like to have a sense of control, to believe they are doing the right thing in being able to announce " oh, I don't let my children have any sugar" It's a real shame for all those parents who have waited to be able to enjoy all of these little experiences with their children who now cannot because of all the modern day "whinchers". Sending your child off to school/ childcare on their "special day" without any cake rather leads to a "flat" feeling all round. Childhood memories are made of all these small , yet very special moments, so lets stop taking them away.